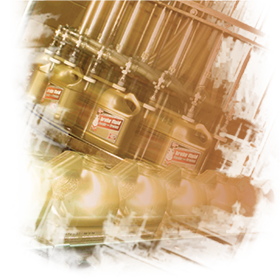 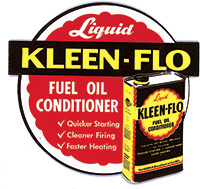 Liquid Kleen-Flo was
adopted as the company’s
official name. 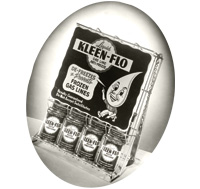 is a proud Canadian company whose history spans 3 countries, 3 principal organizations and over 70 years. The Combustion Utilities Corporation of Montreal, J.A. Tumbler Laboratories of Baltimore, Maryland and Burmah Castrol of the United Kingdom have all contributed to the existence and progressive growth that is Kleen-Flo.

was formed in Montreal in 1939. The organization was a pioneer in the treatment of fuel oil used for both household and industrial applications with over a billion gallons treated in the first five years of operation. “Liquid Kleen-Flo Fuel Oil Conditioner” was the company’s first product which rapidly gained approval from fuel distributors and their customers.

Kleen-Flo Diesel Fuel Conditioner is still available today and through extensive research and development has become a mainstay in the automotive and heavy duty industries. It was this dedication to research that enabled Kleen-Flo to create the world’s first gas line antifreeze.

Chemist J.A. Tumbler started the Tumbler organization in Baltimore, Maryland in 1932. A trained research chemist, Mr. Tumbler was interested in discovering the cause of finish oxidation on auto-motive paintwork. J.A. Tumbler concluded that the ultra-violet rays of the sun, robbed lacquer and synthetic enamel finishes of essential ingredients. This caused drying out of the finish which led to dulled lustre and sub-surface cracking. Industry experts confirmed Mr. Tumbler’s conclusions.

In 1937 Tumbler Laboratories announced the launch of a liquid wax line that later received patent protection from the U.S. Patent Office. Mr. Tumbler was not only a chemist and entrepreneur but a shrewd marketer. Tumbler believed that his products should be available to the trade only, but the general public must be educated on the causes of oxidation and the performance abilities of his products. Advertising in such publications as Time magazine and the Saturday Evening Post provided a medium for his efforts. Mr. Tumbler also introduced the automotive aftermarket to point of purchase displays, consumer flyers and co-op funds all before the end of World War II. J.A. Tumbler Industries broadened its product offering to the automotive segment which enjoyed great success in North America and around the world.

Kleen-Flo products are used around the world with significant penetration in North America, the Mediterranean, Africa, India, New Zealand, Asia and the West Indies. Kleen-Flo’s facility in Poland has provided distribution to Eastern European markets. From the humble beginnings of one product, the Kleen-Flo line has grown to over 200 and continues to grow as customer needs change. Today, Kleen-Flo Tumbler Industries, headquartered in the greater Toronto area, is owned and operated by its employees with a keen eye on the future and a proud sense of the past.